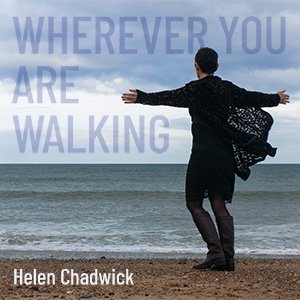 The new album is OUT! LISTEN OR DOWNLOAD HERE

COMPOSING FOR THEATRE
Monday 11th to Thursday 14th July
I’ll be composing and collaborating on a new play by Stephanie Street in development at the National Theatre Studio.

ROUNDS, CANONS AND CHANTS in Exeter
for those who love to sing and for choir leaders
all learning is by ear
Saturday 24th September
10.30am to 4pm ( arrive from 10.15am)
INFO and BOOK

SOLD OUT EVENTS do not appear here.

More info about the WHEREVER YOU ARE WALKING album and songs

With thanks to all those who told their stories that feature in our performances and on this album and to the writers and publishers.

1. Illa Lucem Extendebat means “She stretched out the light”. I found this quote in the garden at Hawkwood College near Stroud shortly before the death of a young artist and composer friend, Harry Banks, to whom the song is dedicated. It was commissioned by the Voice Project for Norwich Cathedral.
Soloists: HC & VC with SD, & KZ

2. Truth is Beauty is a mash up of a line by John Keats. I wrote the song for our song-theatre show TRUTH in which I invited people to send in stories of a moment in their life when they told a truth or lied and the impact of doing that.
Sung by HC, VC & BM.

Tracks 3,5,6 and 19 all have text from Shakespeare’s Dream. The first three I wrote for an in the round banquet version featuring Titania, Oberon and four singers. Sung by HC, SD, BM & KZ. Track 19 was composed for a site-specific commission in the newly refurbished front of house spaces of the theatre in Stratford upon Avon.
Soloist: KZ with us all

4. Along the Length of Your Body
Sung by HC & JG

7. Shopping and Eating is based on a story Alicia Carey sent me for TRUTH.
Soloist: HC with VC & SD

9. I Keep Hoping is from a quote by the Liberian journalist Kenneth Best from an interview he did for American journalist Larry James. At the time of the interview Kenneth was putting himself in great danger by telling the truth about what was happening in Liberia under Samuel Doe. When Larry asked him why he was taking such risks, this was Kenneth’s answer. It was the last song in our song-theatre show War Correspondents.
Soloist: VC with HC, SD & KZ

10. Towards the Light  We performed this song in TRUTH which was choreographed by Steven Hoggett. During the long held note we three singers walked gently across the full width of the stage before turning to stand facing the audience for the next verse. It was a moment when time seems to stop.
Soloist: HC with VC & SD

11. Listen is from the poem To My Daughter (A Letter from Prison) by Alicia Partnoy in Revenge of the Apple (Cleis Press 1992) translated from the Spanish by Richard Schaaf, Regina Kreger and Alicia Partnoy. Alicia is an Argentinean human rights activist, poet, professor, and translator. Do look her up. I once had the great joy to eat home made empanadas with her and her family in LA where she now teaches literature. Sian Croose commissioned the song for a project for Amnesty International.
Soloist: HC with KZ, VC & SD)

12. Living A Story is from a true story sent to me by Elaine Mendoza for our show TRUTH.
Soloist: VC with DC, HC & SD)

13. Because of Lies I wrote this for TRUTH looking back on some recent lies perpetrated by governments
Sung by DC, HC & SD

14. When Truth Threatened My Life is from the life story and writings of dancer and actor Ruth Posner who escaped the holocaust and came to the UK as a young child with her aunt. She and I became friends many years ago through our involvement in theatre and I also composed a song with text by her son Jay Posner which is on the album Gone From View.  Ruth has written about her life in her books including in Bits and Pieces of my Life
Soloist: HC with VC & KZ

15. Peace is from a moment during a quiet new year I spent alone in a house in Wales surrounded by sheep.
Sung by HC, BM & KZ

16.Tenderly is by St John of the Cross translated by Daniel Ladinsky and the middle section is by Rumi. I later added instruments for a choral event in Salisbury Cathedral which composer Howard Moody and I created for Salisbury Festival about the commonality between different mystical traditions, featuring several of my Rumi settings.
Soloists: HC, DC, JG with SD & BM

17. Falling is from the linocut poem Falling by artist and writer Peter Ursem. Peter and I became friends through his wife Helen Porter with whom I have collaborated on several performance projects.
Sung by VC & HC

18. While My Father Was Dying was written for a collaboration lead by Ansuman Biswas with Sam Lee and I for The Old Church in Stoke Newington, London
Soloist; HC with DC & JG